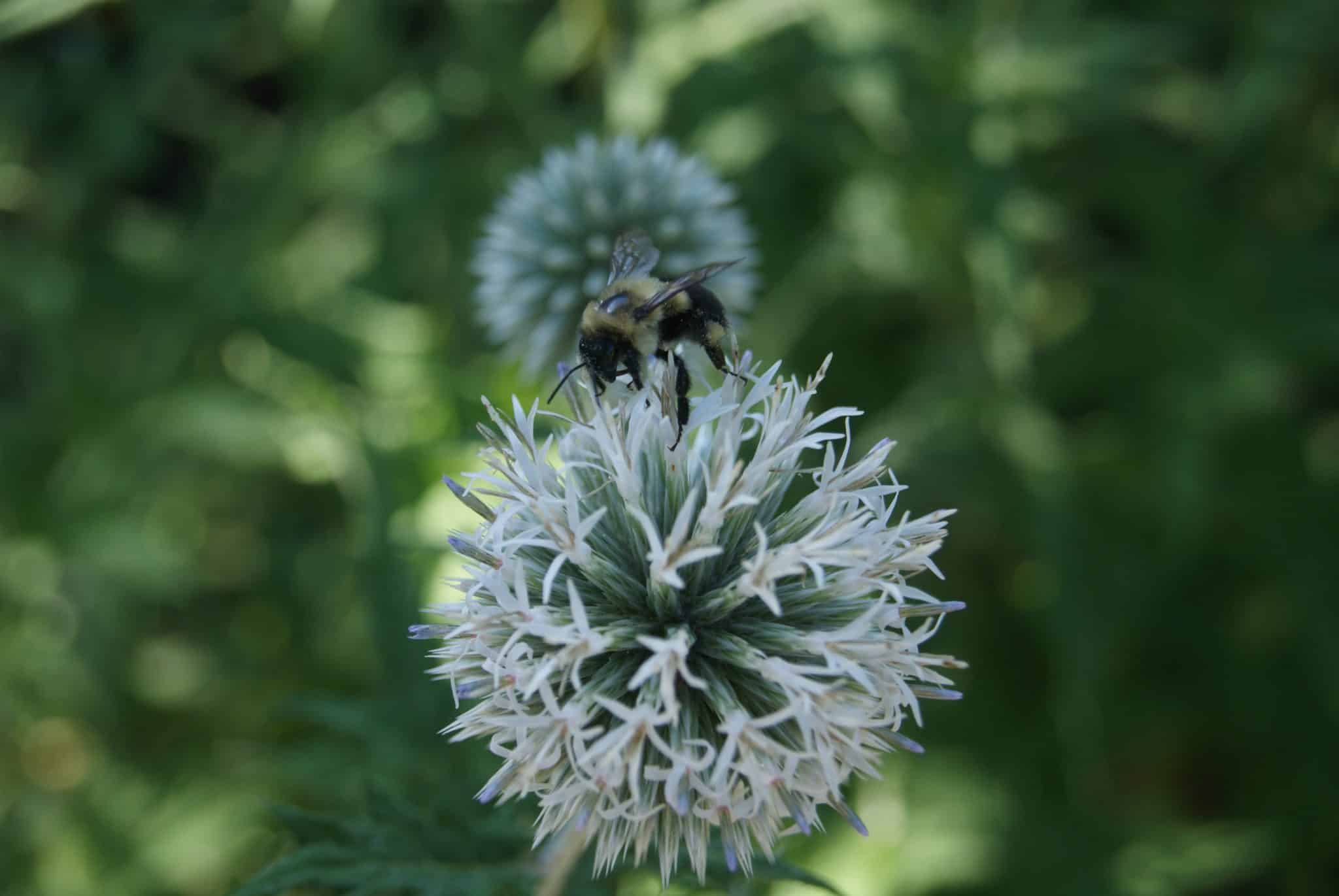 Posted By: FOECanadaOrg Comments Off on Combat the Biodiversity Crash by teaching about wild bees and other beneficial insects

By Beatrice Olivastri and Ian Shanahan.

Wild native bees are barely noticed, but they work away like undercover agents in our fields, gardens, forests, and parks. There are more than 4000 species of wild native bees recognized in North America, 20,000 worldwide, and new species are still being discovered. Bees make up a cohort of flying friends essential to our well-being and that of the planet’s biodiversity.

Scientists tell us that between 70 to 80 per cent of flowering plant species worldwide depend on pollinators, especially wild bees, and they estimate that one in three mouthfuls of food depend on these pollination services. However, unlike honeybees, who have their loyal beekeepers, there is limited information on the population and health status of wild native bees.

Despite the importance of wild bees, even what little we know is poorly and/or unevenly represented in today’s largely out-of-date school curriculum. If we knew more about these fascinating creatures and the important roles, they play in pollinating food crops and native plants, would we do a better job of protecting them?

In a new partnership, Friends of the Earth and Green Teacher have taken on the task of educating teachers and students (and their parents) about the importance of wild native bees. Interest in “saving the bees” was kicked into high gear in Canada in 2014 with reports of massive bee kills from exposure to neonicotinoid pesticides. We wondered, are the education systems across Canada part of the effort to save the bees? We conducted a review of science curriculum in each province and territory. The results were not promising.

First, how dated are science curricula for the youngest, most impressionable students? Very. Three provinces have mandatory science curricula for elementary schools that are over 20 years old: Alberta’s K–6 guidelines were published in 1996, Manitoba’s K–4 in 1999 and Grades 5 to 8 in 2000, and New Brunswick’s K–2 in 2002. Four jurisdictions published their science curricula over 10 years ago, including the Northwest Territories in 2004, Ontario in 2007, Québec in 2009, and Saskatchewan in 2011.

So, what about high school curricula? It didn’t fare much better. We assessed high school curricula using 2017 as the benchmark based on data reported in Germany and then Costa Rica suggesting a state of catastrophic insect population collapse (now commonly called the “insect apocalypse”). Causes include, but are not limited to, habitat loss, chronic exposure to pesticides through modern industrialized agriculture, and climate change, all important stressors on wild native bees.

Newfoundland updated its biology curriculum in 2020. All other jurisdictions had curricula created prior to 2017. Ontario and New Brunswick were the most dated at 2008. (Nunavut’s curriculum was not accessible online, and British Columbia is in the process of updating its elementary and high-school curricula, which are also used by the Yukon with minor changes.)

The broad take-away is that any teaching about the significance of insect decline, including bees, depends on individual, dedicated teachers and would not be universally taught.

Québec is the most progressive province in addressing bee-toxic pesticides, and yet this leadership is not reflected in its curriculum guidelines. Montréal is the first city in North America to ban the sale of more than 100 pesticides products for domestic use, including for gardens and yards. This, too, should be reflected in what students learn about protecting wildlife, such as safeguarding Québec’s 365 wild native bees.

In 2021, UNESCO declared environmental education must be a core curriculum component worldwide by 2025. In the lead-up to The Berlin Declaration on Education for Sustainable Development, UNESCO published a survey of curriculum frameworks in close to 50 countries and reported that only 19 per cent speak of biodiversity. We used this finding as the final benchmark for our review of Canadian science curricula.

In the 12 Canadian jurisdictions we were able to assess, all provinces and territories mention biodiversity in some fashion for high schools — good news, at last.

Science education is key to understanding important facets of biodiversity, such as the role of insects and, in particular, wild native bees. As academics like Stephen Kellert and David Sobel have written, it is especially important for middle-school students and adolescents to have direct experiences with nature, preferably in their local “patches.” Fortunately, learning about wild native bees and other pollinators lends itself well to local, place-based learning and inquiry-based methods that are gaining traction across faculties of education and, by extension, many schools. These pedagogical approaches are rich in hands-on, real-world experiences such as cultivating pollinator-friendly plants, which can be done at various scales and locations.

Based on our survey of Canada-wide curricula, we are very concerned that teaching about bees is at the discretion of dedicated teachers only, at least in Canada. Revised and updated curriculum guidelines could incorporate important scientific findings into the way young people learn about insects and their value. Education can convert the fear of bees and other pollinators to appreciation and protection.

To save the bees, all people, young and older, need to learn about the links between healthy populations of wild native bees and healthy crops and native plants.