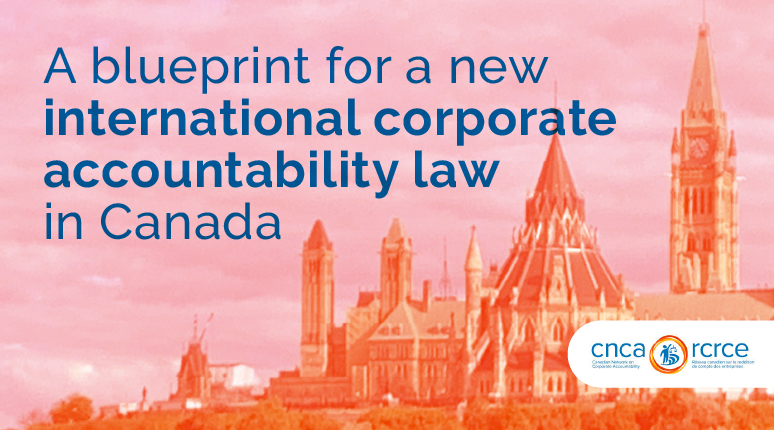 Ottawa, ON / May 31, 2021—Today the Canadian Network on Corporate Accountability (CNCA) releases draft model legislation that provides lawmakers with a blueprint for writing into Canadian law the corporate duty to respect human rights and the environment.

The draft model law, if adopted, would require Canadian companies to prevent human rights and environmental harm throughout their global operations and supply chains.

Similar laws are in place or being developed in several countries. Canada, however, is falling behind. Instead of legally requiring companies to respect human rights and the environment, Canada encourages them to voluntarily take measures to do so.

“All around the world, people are being harmed by the business practices of Canadian companies and their subsidiaries, subcontractors and suppliers,” said Jean Symes, from the feminist social justice organization Inter Pares. “We are calling on Canadian lawmakers to catch up to global leaders by adopting our model legislation, a comprehensive law that would help respond to the widespread and egregious abuses linked to Canadian companies including forced labour, sexual violence, and murder.”

Under the CNCA’s proposed law, if a company causes harm or fails to do its human rights and environmental due diligence, those affected would have the statutory right to bring a civil lawsuit against that company in Canadian court.

“Canadian businesses that are already doing what’s needed to protect human and environmental rights will welcome this legislation,” said Hassan Yussuff, President of the Canadian Labour Congress. “Those that aren’t will now be held accountable for their failure to act.”

Over 150 organizations and unions that work with people impacted by the activities of Canadian companies in 32 countries around the world have endorsed the CNCA’s proposed law.

“The CNCA’s proposal stands in stark contrast to the modern slavery reporting law currently being examined by the Canadian Senate,” said Catherine Coumans, co-manager at MiningWatch Canada. “The proposed law released today moves beyond reporting and requires companies to change their behavior – and stop profiting from human rights and environmental harm – or face significant consequences.”

The CNCA released a draft of the model Corporate Respect for Human Rights and the Environment Abroad Act at a virtual press conference in Ottawa today.

Speaking at the May 31st 2021 virtual press conference are:

For more information or to attend the 10:30 am press conference, contact:

Learn more about the proposed Corporate Respect for Human Rights and the Environment Abroad Act.