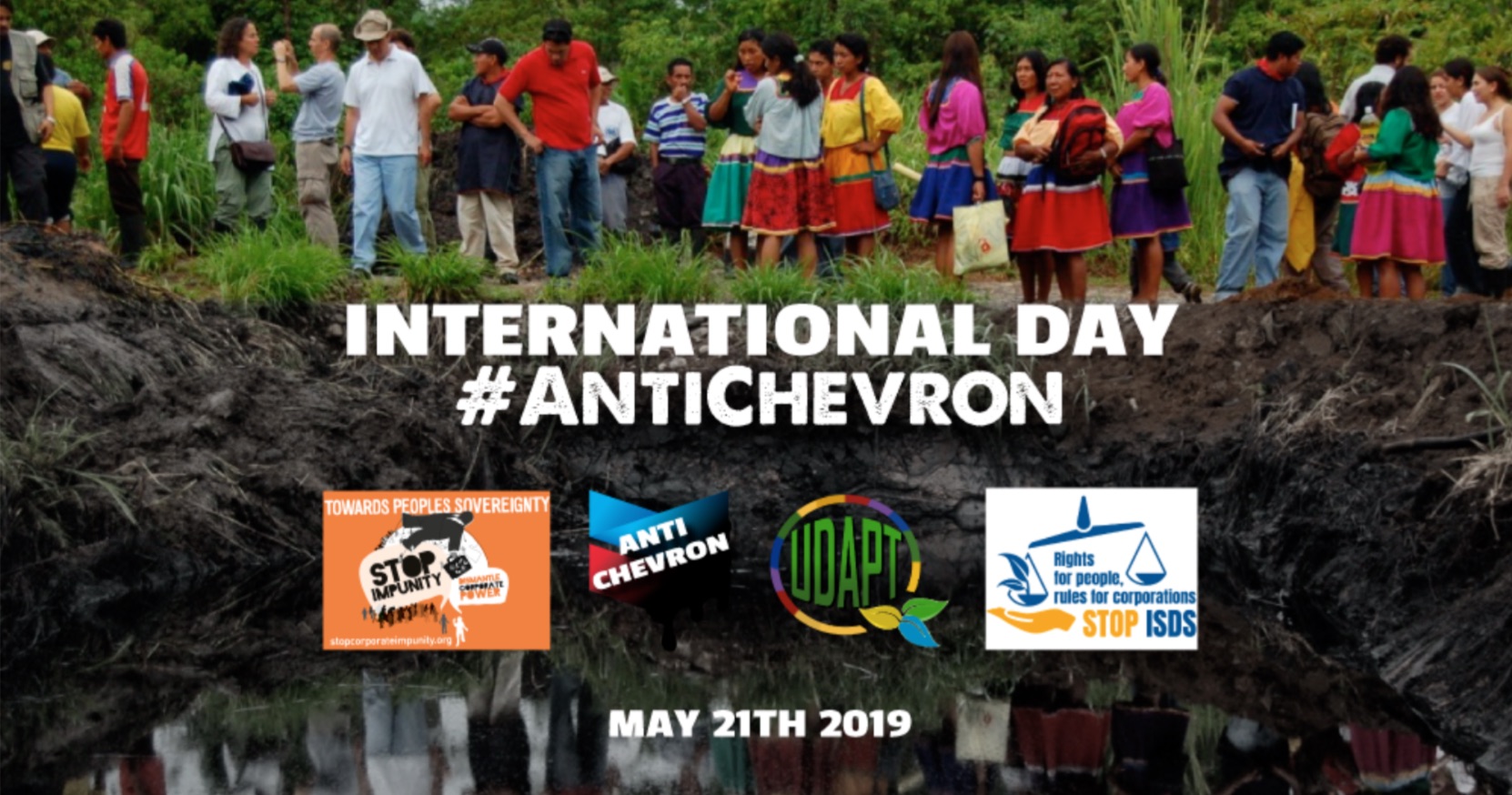 Posted By: FOECanadaOrg Comments Off on Massive Mobilisation of the International Civil Society on the Global Anti-Chevron Day

268 organisations, networks, social movements and trade unions from different continents, representing more than 280 millions of persons, are mobilised to denounce the Chevron’s impunity in Ecuador and ask the president of Ecuador to support the Chevron case in favour of the indigenous and peasant communities.

After 15 years of litigation in Ecuador on the remediation of the major oil pollution in the Amazon, a coalition representing over 30,000 inhabitants, won the case against the oil-giant Chevron once and for all. Yet Chevron always refused to pay and was finally successful in using the mechanism of Investor State Dispute Settlement (ISDS) against the State of Ecuador. 268 organisations, social movements and trade unions worldwide representing more than 280 million people denounce the impunity of the Corporation and ask the Ecuadorian Government not to intervene in the trial and judgement between the affected communities, joined together in the UDAPT (Union of Affected by Texaco Chevron) and Chevron and to protect the rights of its citizens.

The case of the UDAPT is the largest environmental justice litigation in the world. First started in 1993, on behalf of 30.000 indigenous and peasants in Ecuador, Chevron was sentenced in 2011 to pay USD 9.5 billion to be used for the repair of the environmental, cultural and social damages in the Ecuadorian Amazon caused between 1964 and 1992. This sentence was confirmed in all courts. However, in 2018, Chevron won a case filed before the Permanent Court of Arbitration of The Hague using ISDS against Ecuador. The company claimed that the state violated the bilateral investment agreements with the United States. The arbitrators ordered the Ecuadorian State to pay Chevron a financial compensation and to annul the sentence in favour of the affected communities. This would mean that the State would violate its own Constitution This would represent a dangerous international precedent as it sets an arbitral court above national courts.

In an initiative promoted by the Global Campaign to Reclaim Peoples’ Sovereignty, Dismantle Corporate Power and Stop Corporate Impunity, in alliance with members of the European Campaign “Rights for Peoples, Rules for Corporations-Stop-ISDS”, and other international networks and in close coordination with the UDAPT in Ecuador more than 250 organizations, social movements, trade unions now ask the Ecuadorian President Lenin Moreno in a letter not to intervene in the trial between the affected communities and Chevron.

On the 21st of May, Global Anti-Chevron Day, in support of the important mobilisation in Ecuador by the affected communities, organizations in Europe, Latin America and United States will hand the letter to the representatives of the Ecuadorian Government. The letter denounces Chevron’s impunity in Ecuador as well in other countries (Argentina, Brazil, Kazakhstan, United States and Indonesia) and also points out the major impacts caused by companies such as Chevron on global climate change. People in Ecuador and organisations all over the world are standing up against ISDS cases such as the Chevron arbitration against Ecuador, and support the elaboration of an international legally binding instrument at the United Nations for transnational corporations to respect human rights.

Pablo Fajardo (UDAPTs lead lawyer) declared: “After 15 years of litigation in Ecuador, the entire Ecuadorian justice system, based on the rule of law, fully ratified the verdict against the oil company. But Chevron using the ISDS system aims to impede the affected people to achieve justice. For us, the ISDS system has become the main obstacle to access to justice for people who are victims of corporate crimes.”

The ISDS system allows foreign investors to sue countries, if their policy stands in the way of the investors expected profits. Many of the cases are filed by fossil fuel companies against States trying to implement policies to protect their citizens and the environment. For the affected communities in these countries, it is becoming almost impossible to hold these corporations accountable for human rights violations. In Europe, an ongoing civil society mobilisation against ISDS has collected half million endorsements.