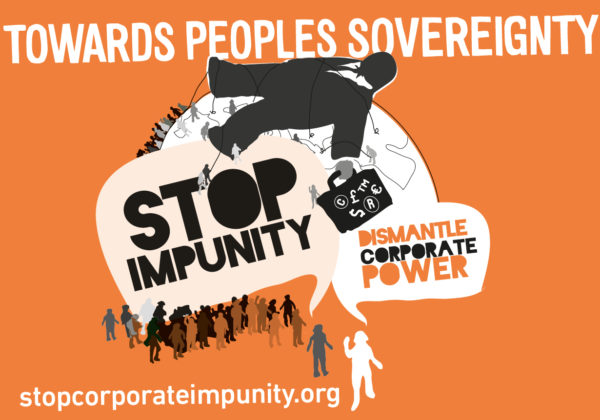 THE CASE OF CHEVRON IN THE ECUADORIAN AMAZON: THE RULING OF THE SUPREME COURT OF CANADA CLOSES THE DOORS TO END IMPUNITY

Posted By: FOECanadaOrg Comments Off on THE CASE OF CHEVRON IN THE ECUADORIAN AMAZON: THE RULING OF THE SUPREME COURT OF CANADA CLOSES THE DOORS TO END IMPUNITY

The Global Campaign to Reclaim Peoples´ Sovereignty, Dismantle Corporate Power and End Impunity regrets the ruling of the Supreme Court of Canada regarding the case of Chevron in the Ecuadorian Amazon, and reaffirms the urgent need to establish a UN Binding Treaty on Transnational Corporations and Human Rights.

The Global Campaign to Reclaim Peoples´ Sovereignty, Dismantle Corporate Power and End Impunity, a global network of over 200 organizations, movements, trade unions and communities affected by transnational corporations worldwide, regrets the decision of the Supreme Court of Canada, which has refused to admit the appeals filed by the communities affected by Chevron -formerly Texaco- in the Ecuadorian Amazon.

In 2015, the seven judges of the Supreme Court of Canada decided to accept jurisdiction to carry out an enforcement or “exequatur process” in Canada, upholding the legitimacy of the Ecuador Supreme Court´s decision on Chevron. This decision brought strong hopes to the indigenous communities gathered in the Union of People Affected by Chevron – Texaco in Ecuador (UDAPT) that justice could be achieved. However on May 23, 2018, the Court of Appeals of Ontario rejected the demands of the affected people, arguing that Chevron Canada is an autonomous and independent entity from the parent company Chevron and therefore with no obligation to the Ecuadorian justice system. This represented another heavy blow for the Ecuadorian indigenous people, who filed the appeal that has been rejected today.

It is worth remembering that Chevron´s operations in the Amazon deeply and negatively affected the lives of indigenous people, the ecosystem, water and common goods. From 1964 to 1992, the company dumped nearly 65,000 barrels of oil and more than 16 billion gallons of waste water into rivers and lands in the rainforest, affecting the health and livelihoods of over 30,000 indigenous people and peasants from various communities. The atrocious consequences of its activities in Ecuador resulted in the case being known as the “Amazon Chernobyl”. In the face of a disaster of this magnitude, UDAPT has been fighting for over 25 years and currently its goal is to achieve the enforcement of the decision of the Ecuadorian Supreme Court, so that the environmental, social and cultural damage caused by the oil company is redressed.

The ruling of the Ecuadorian Supreme Court is final and irrevocable, and therefore, the affected people will persist in their struggle for access to justice in other foreign jurisdictions until the damage is redressed.