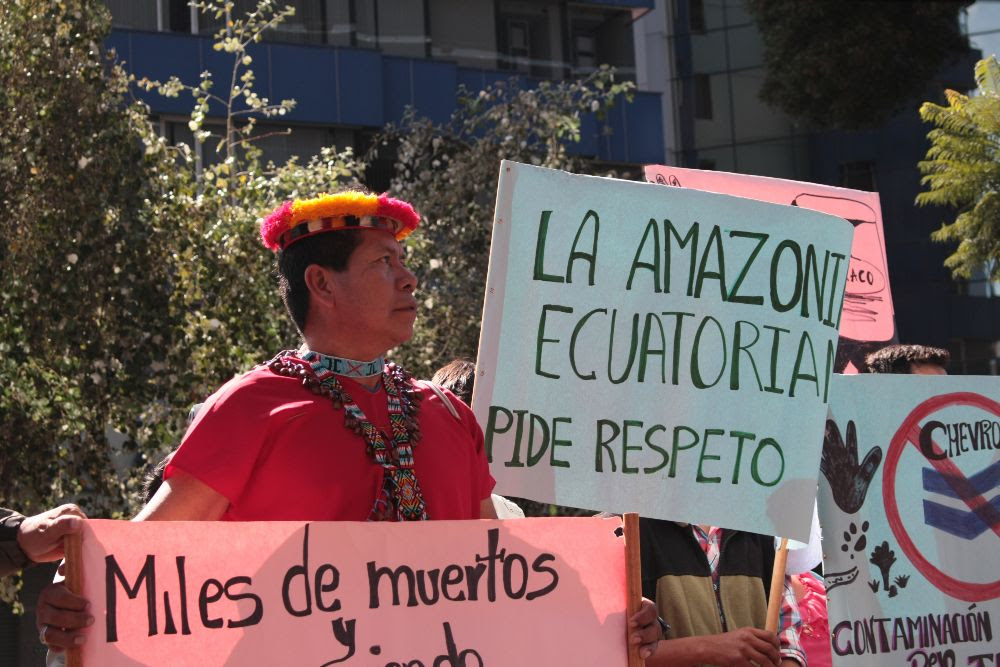 On April 4th 2019, the Supreme Court of Canada dismissed the appeal in the historic case of the Indigenous people of Ecuador versus Chevron, which has become known as the “Amazonian Chernobyl” due to its devastating impact on the region. The Ecuadorian plaintiffs seek to enforce a judgment by Ecuador’s highest court ordering Chevron to pay more than $9.5 billion dollars for clean-up of the pollution  caused by deliberately negligent operation of oil fields.

The ruling represents a step backward for the Union of People Affected by Chevron-Texaco (UDAPT) of Ecuador and victims of corporate crimes around the world. The Supreme Court of Canada could have adopted an innovative forward-looking approach with respect to corporate responsibility, justice and equity by ensuring Indigenous communities have access to justice and reparations. By denying the appeal, the Supreme court chose to continue with the interpretation of the current laws which favour corporate impunity.

“It’s regrettable that legal technicalities and the lack of money pose obstacles to access to justice for people who are victims of corporate crimes. In spite of the decision in Canada, our quest for justice will continue,  and we will initiate legal proceedings in other countries” said Willian Lucitante, Coordinator of UDAPT.

The Supreme Court of Canada previously recognized this lawsuit as public interest litigation. But the judges of the Ontario lower court declared that “[t]here is a difference between economic reality and legal reality”, so the laws in force should not be modified. If the laws are changed, the Ecuadorian lawsuit could affect Canadian companies and force them to prioritize human rights above their business interests.

Pablo Fajardo, the lawyer for the Indigenous people and peasants affected by Chevron said “It is regrettable that, once again, a country demonstrates that justice is structured to protect and guarantee impunity for transnational corporations. The Supreme Court of Canada did not get a chance to hear the merits of the Ecuadorian case and only resolved not to accept the appeal. Our lawyers did not get the opportunity to explain the ramifications of Chevron’s legal structure, which protects it from lawsuits by those impacted by their negligent operations. This is a disastrous precedent for social struggles, for rights and justice”.

The communities’ lawsuit for justice and reparation has been advancing through the courts for over 25 years. This trial has become an emblematic demonstration of impunity that allows transnational corporations to suffer no consequences when they violate Indigenous and human rights.

The UDAPT is a grassroots organization made up of six Indigenous Nations and more than 80 peasant communities, representing over 30,000 people affected by the oil company Texaco and their irresponsible activities in the Ecuadorian Amazon. Texaco, acquired by Chevron in 2001, contaminated more than 450.000 hectares of virgin forest. The oil company dumped crude oil, toxic waters and polluting gases that affected ecosystems, the population’s health and cultural systems, security and food sovereignty, which increased poverty and exclusion. This contamination has had a serious impact on the health of the UDAPT community; causing the highest rates of childhood leukemia in Ecuador. Cancer deaths are one hundred and thirty percent more frequent and the mortality risk is two hundred and sixty percent higher than in other parts of Ecuador. Cancer accounts for thirty two percent of total deaths, 3 times more than the national average. Chevron uses all means to obstruct the communities’ access to justice while  the contamination of the soil and rivers of the Ecuadorian Amazon continues. Every year people die without hope of reparation for future generations.

During the past years, UDAPT along with hundreds of non-profit organizations that stand for human rights has joined with international efforts, whose aim  is to lobby for the creation of a binding treaty on transnational corporations and human rights at the United Nations. The emblematic battle of the Ecuadorians against Chevron has unveiled the structure of impunity that allows transnational corporations to get away with gross human rights violations and environmental damage.